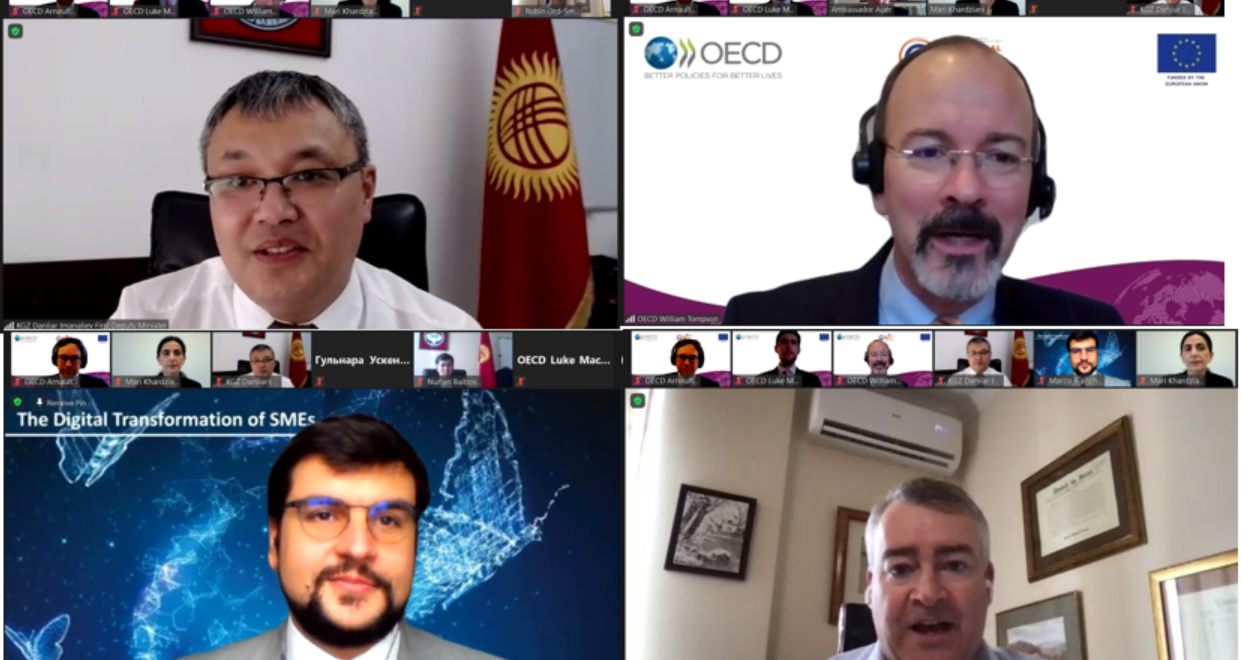 On 25 March 2021, the OECD and the EU organised the first capacity-building webinar on SME regulations and digitalisation with the government of Kyrgyzstan as part of the project Improving the Legal Environment for Business in Central Asia.

The meeting was an opportunity to discuss ways to improve the operational environment for SMEs in Kyrgyzstan, which was identified as a priority area for action in the project report for the first phase of the work. The webinar was organised as part of the OECD Policy Component of the EU Central Asia Invest initiative, and brought together experts from the OECD and partner countries with a number of stakeholders in Kyrgyzstan, from both the public and private sectors, as well as representatives of the EU Delegation.

Opening the session, Mr Daniiar Imanaliev, First Deputy Minister of Economy and Finance, gave a detailed and sobering assessment of the impact of the COVID-19 pandemic on the country’s economy. Mr Imanaliev noted that the government was aware of the particular challenges facing SMEs at this time and spoke of a range of regulatory changes currently underway to support firms in the country. Ambassador Eduard Auer, Head of the EU Delegation to Kyrgyzstan, outlined a number of the measures – both economic and socio-sanitary – being taken by the EU to support the Kyrgyz government during the pandemic. The Ambassador noted the importance of building in policies to support the digital transformation of Kyrgyzstan into recovery planning, thus introducing today’s capacity-building sessions.

Mr Luke Mackle, Policy Analyst in the OECD Eurasia Division, presented an overview of the impact of the crisis on Kyrgyzstan’s economy, before outlining some of the key recommendations for the country from the Improving the Legal Environment for Business and Investment in Central Asia report. Complimenting the findings from the report, Mr Robin Ord-Smith, the Business Ombudsman of Kyrgyzstan, gave a firm-level overview of the operational challenges facing the country’s businesses, noting that they had seen a rise in pressure from public bodies, particularly inspection and revenue-raising agencies, since the beginning of the pandemic.

Ms Mira Khardziani, Head of the International Public Law Department at the National Agency of Public Registry of Georgia, led a session on business registration and the creation of a unified one-stop-shop (OSS). Ms Khardziani explained how the institutional setting for the OSS had been established, with the current business registration services having evolved from the country’s successes in property registration. She also introduced how these services were digitalised into one platform.

Following Ms Khardziani’s intervention, Mr Marco Bianchini, Economist in the OECD Centre for Entrepreneurship, SMEs, Regions and Cities, explained how firms have used digitalisation as a tool to adapt during the crisis, while outlining a number of policies that the government can implement to support the digital transformation of SMEs, in particular to increase their access to online platforms such as payment and ecommerce.

Mr Imanaliev offered some closing remarks to the session, outlining that the government was already working on a number of the issues raised during the session – from the digitalisation of trade procedures to the establishment of a one-stop-shop – and expressed his gratitude to the speakers, the OECD and the EU for their continued support.